The easy way to incrementally backup billions of objects 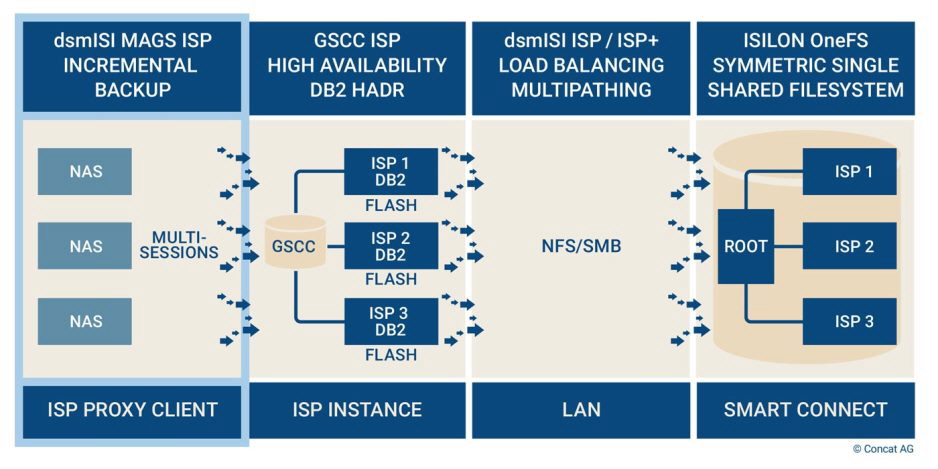 IBM Spectrum Protect is still the only software capable of continuously backing up file systems entirely incrementally. With extremely large file systems, containing many millions or even billions of objects, this approach, however, does have its limits. Very often the time used for identifying changed, new or deleted objects alone takes days or even weeks – and thus renders a service level which requires a daily backup cycle which is impossible to achieve.

dsmISI MAGS (Massive Attack General Storage) solves this fundamental problem by accelerating identification of changes and the resulting movement of data by orders of magnitude.

In several of my previous posts I have mentioned the shortcomings of NDMP. One of it is the lack of support for an incremental forever strategy, a feature that TSM users typically used to have. Furthermore, TSM support for NDMP is way below average, compared to other backup Software solutions (for example, EMC Networker can create and maintain OneFS Snapshots, roll them over to tape and index them. Watch out for my blogpost here soon).

One way around this would be to backup the files in the filesystem via NFS or CIFS. To avoid the required file system scan (or treewalk), the ideal solution would be something like the isi_change_list feature mentioned in a previous post. However, the first version of that change_list API has not shown been very efficient with TSM so we have to wait for the next version which we’ll anticipate at the end of 2015. Until then, the only way to accelerate a backup via CIFS/NFS is massive parallelism. General Storage has developed a solution for this called MAGS – Massive Attack General Storage.

MAGS
During backup, TSM scans through file systems, compares their content with what it already backed up and transfers changed/new files, expires deleted files, updates properties etc. TSM is doing backups in a multi-threaded fashion, spawning off up to 128 independent threads (officially 10) doing the actual transports of data (resourceutil parameter).